Tips To Learn To Become A Camera Operator Profesional

I really enjoy working with geared heads, although I rarely get to use them anymore. Most of my projects can’t afford to rent one for me. Hopefully this will change with the advent of the Gearnex geared head, which I’ve now used on several shoots.

The geared head offers an incredible amount of control over camera moves, especially dolly moves. For some reason it’s very easy to match pan and tilt speeds to a dolly move by spinning wheels rather than moving a pan handle around. The wheels also offer a wide range of possibilities from very subtle adjustments to aggressive camera moves that stop on a dime.

WHEN IN DOUBT, KEEP MOVING

There are times when responsiveness is the key to getting a shot, usually in a situation where you’re shooting either very emotional or action-packed material. Keeping your hands moving a little bit on the wheels, in the case of a geared head, or keeping your hand in motion on the pan handle, in the case of a fluid head, can speed up your responsiveness. I learned this trick originally from a sound mixer, who always wiggled his hands on the mixer knobs during takes. I asked him why, and he told me that it is much easier to move your hands quickly in response to a loud noise if they are already moving. If your hands are standing still it can take longer to react. He never wiggled his hands on the knobs enough to affect sound levels, but if he had to turn them quickly his hands were already in motion.

I find that I operate a fluid head better when one hand operates the head and the other is placed around the base of the head, where I can sense panning movement, or on the tripod or dolly. Having that point of reference, either in feeling the head rotate or having a solid surface against which I can judge movement, aids me considerably, particularly on dolly moves where one can become “lost in the move” and not quite know visually what affect your movements are having on the camera because everything is moving.

One key advantage of a geared head is that it divorces your mass from the camera’s movement. In the event of the dolly coming to a sudden stop, your body may want to continue down the track. As long as the gear head wheels don’t turn, though, the camera won’t follow your body. This can be more difficult with a fluid head, but it’s definitely possible if you can distribute and brace your weight through three points of contact with the dolly. If you’re sitting, plant your feet firmly, or find a comfortable sitting position, and then put your upper body weight onto your left hand, which should be placed somewhere near the camera (around the base of the fluid head, or the boom arm itself). The idea is that your weight is firmly planted between your legs and that hand resting on the dolly, leaving your panning hand free to operate the camera.

COMPOSITIONS DON’T HAVE TO BE BALANCED

In a 1980’s movie entitled “The Hit,” two characters have a conversation at the base of a lighthouse. The camera is on the ground looking up and the bulk of the lighthouse dominates the dead center of the frame. One character is leaning against a car in the foreground on frame left, and the right side of the frame is empty. 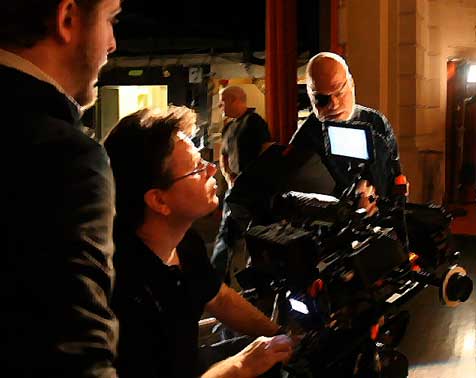 How To Be a Better Camera Operator

As there are so many different cameras out there I’m not going to discuss the ‘right’ camera to choose or use, as this largely depends on the type of work you do and anyway, as I’m sure you’ve already discovered there’s so much stuff online now about all the various cameras that are available, their pros and cons, special features and …well the internet groans under the strain of it all!

In fact every time I Google ‘DSLR‘ I’m sure I can hear my laptop give out a little whimper. Bless it!

Remember film and video equipment is highly sensitive and precision built so don’t throw it around like it’s an old saucepan! Treat it with care and respect.

If you hire camera kit, treat it as if it’s your own, don’t mistreat it because it’s ‘just hired’ – that’s just totally unprofessional. Remember, if you don’t look after hire gear then the hire company you get it from probably won’t hire it out to you again. Simples. Respect all equipment at all times!

The Tripod – Your three legged friend…

The poor old tripod gets a pretty bad rap, nobody really seems to rave about it. It doesn’t have any fancy buttons to press and you can’t look through it and marvel at the amazing shot you’ve just framed. No, it just stands around lonely and dejected and you tolerate carrying it around on your shoulder because you’re obliged to (feel bad yet?…).

But the truth is, a good tripod is like a good friend… and as we all know you can always rely on a good friend. My trusty Ronford F4 weighs a ton and has legs as stiff as a geriatric with chronic arthritis, but we’ve been together over 30 years and I wouldn’t change it for the world. Despite its little foibles, it’s rock steady and its pans and tilts are as smooth as the day it was made… it has never let me down. 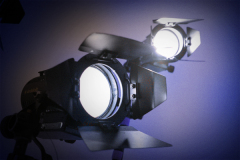 A GUIDE TO BECOMING A CAMERA OPERATOR

Experienced camera operators possess unique combinations of skills. They all seem to have artistic sensibilities – facile perception, a keen eye and the ability to compose balance and beauty in a frame; they also have impressive technical skills – a solid understanding of lighting, audio equipment, electrical requirements and even the physics required to produce the right shot with efficient timing. Due to the rigorous demands of the job, and the un-repetitious nature of the work, most camera operators build a career with a blend of education and on-the-job training. They also tend to be confident, lifelong learners willing to take on new challenges and learn new technologies to develop their craft.

A camera operator is someone who sets up a camera and records images that will later be edited for an audience. Camera operators are employed to film TV shows, motion pictures, music videos, documentaries, news segments, corporate meetings and sports events. In the US, most operators work in the motion picture industry or in television broadcasting, but the number of operators working in corporate video production is increasing. Some camera operators are employed by production houses, corporations and institutions such as churches with in-house studios; and others work as freelancers or owner operators. The median annual Camera Operator salary in the US is $38,938, as of November 07, 2016, with a range usually between $31,958-$47,334, however this can vary based on geography and industry. For example, the mean income for the motion picture industry is $64,810 and the mean income for Broadcast and Radio is $51,970.

Your path to becoming an operator starts with taking a self-assessment. Since a camera operator does indeed operate camera equipment and its related accessories (which can add up to over 100 lbs with the most sophisticated camera packages), there is a level of comfort with the physical and technical nature of the work that you must be able and willing to develop. Learning about the highly technical specifications and capabilities of cameras, audio equipment and lighting is the foundation of becoming an operator. If you are fascinated with gadgets and new technology and you can’t keep yourself from experimenting with your camera settings and the video editing software on your computer, you might have what it takes for the multi-year process to learn the craft. 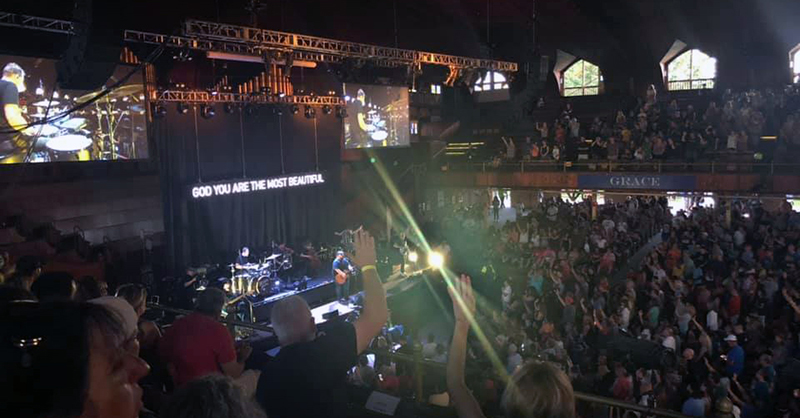 You see, I volunteered to run camera and that turned into me operating handheld, so at times I was on-stage with the bands.

While operating a camera is fresh in my mind I thought I would share some reflections on camera operating in general and operating handheld in particular. Admittedly, these perspectives are from that of a video director, not solely a camera operator.

If you have camera-operating advice you would like to share feel free to do so in the comments section below!

One camera, (the tight follow “money shot”) was situated halfway back in the house, orchestra level with a Fujinon HA42x9.7 (9.7mm – 407mm) stabilized lens. The next camera was “a slash” angle from house-left. This camera like the previously mentioned was in studio configuration (meaning it had a big rear viewfinder, rear zoom and rear focus lens controls), but this one had a Fujinon HA18x7.6 (non-stabilized) lens as opposed to the 42x earlier. The third camera worked a few locations including house-right slash and also had the ability to work the pit and on-stage stage-left as a handheld with a Fujinon HA18x7.6 non-stabilized lens. Since it needed to work both on a tripod (when in the slash location) and handheld (pit and on-stage) it did not have a studio viewfinder, making it easier and quicker to dismount from a tripod and move around. Lastly, my camera had a Fujinon ZA12x4.5 wide angle lens working the downstage center lip, pit and as well as on-stage, stage-right.

As mentioned, the two studio configuration cameras had large viewfinders and rear lens controls. These cameras offered a lens height of about 6.5 feet above the surface that the camera operators were standing. If we had mounted the studio viewfinders on top of the cameras (where they would normally go) that would have meant the viewfinders would be > 7 ft high causing the camera operators fatigue (potentially requiring chiropractic care due to stiff necks) over hours of program content. Instead of mounting the viewfinders to the top of the cameras we had a DIY bar of aluminum which with a wedge mount attached on one end and on the other end were holes to bolt the bar to the camera’s quick release plate. This allowed the bottom of the studio viewfinder to be at the bottom of the camera, side-mounted at eye level for the operator.

What does a TV or film camera operator do?

Camera operators record moving images for film, television, commercials, music videos or corporate productions. They operate film or digital video cameras, usually under instruction from the director or director of photography. On a typical job, you’ll:

set up and position camera equipment

choose the most suitable lenses and camera angles

follow a camera script and take cues from the director, or floor manager if in a TV studio

solve any practical or technical problems

work closely with other technical departments, such as lighting and sound

You may be the only camera operator and use a portable single camera, or you could be part of a TV studio camera team. On feature films and TV drama productions, you’ll be part of a larger crew with a specific role. This might be:

You’ll normally specialise in either film or television work, as the equipment and techniques can differ. However, with the growth in digital cameras and HD technology, it’s becoming easier for camera professionals to work across all formats.

What do I need to do to become a TV or film camera operator?

Employers will be more interested in your technical skills and practical experience than academic qualifications. In practice, many camera operators take a college or uni course to develop their camera skills before looking for work.